Fresh Facts, Attitudes and Positive Vibes for You

LIFE AFTER THE KETTLE WITH A T6 WATER DISPENSER ianuarie 17, 2011

As creative director of limegreentangerine, one of Wales’ stand out creative design agencies, Andy Rees loves the latest gadgets and has an eye for great design. So when he was travelling on the underground to a pitch in London, his eye was automatically drawn to an advert for the T6, the stylish new water machine that dispenses filtered hot and cold water at the touch of a button.
Andy explains: „I was sitting there and saw the ad. I was literally drawn to it. I love my gadgets and I knew right there and then I wanted one.
„Our company had grown to ten people and getting the tea round involved boiling the kettle twice so we were on the look out for a product that would help with that. We also had a horrible looking water cooler that spawned lots of empty bottles. We don’t have a great deal of space so the clutter was a real issue.
„When I got back to the office, I sat down and did the sums. We were paying about L30 a month for the water cooler and the T6 was going to cost L22 a month. Not only we were going to be saving money month on month but at the end of it we would own the machine outright and we had solved both the water cooler issue and the kettle problem. It was a complete no brainer.
„The T6 is great. It is very neat and compact. My biggest concern was that it would not be big enough to cater for nine or ten people. But it soon became clear this was unfounded. There’s plenty of fresh, boiling hot water to go round.
„The thing I love about it most is when people come for meetings. Before, someone had to go and fill the kettle and wait for it to boil to make the tea and coffee. Now the process is instant. The tea and coffee is ready within a minute and people aren’t sitting there waiting for their hot drink. That is a huge benefit.”
Limegreentangerine takes its name from a line in a song by The Cure called Wrong Number that inspired Andy to leave his job and set up on his own. Based in Cardiff, the brand design and digital communications agency works for, among others, clients like National Dance Company Wales, Atradius, Sky TV, Cardiff Devils Ice Hockey and Londonlaunch.
The T6 connects to the mains so never runs out and comes in 12 colours. If you’re wondering which one Andy chose – it was limegreen of course! He said: „It had to be. We don’t have everything in limegreen – that would be too much. But it is a perfect match for the walls, chairs and desks that are!”
For more details: http://www.t6water.co.uk 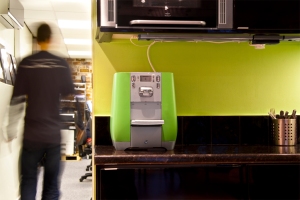